Thank you for your patience while we retrieve your images.

When I first became interested in photographing the imperiled oak trees of California, I began where I often do, with research. I learned about the many types of oaks, including the coast live oak that filled the property where I grew up, and the tanoake—an imposter that lives in the nearby Santa Cruz Mountains where I spent much of my childhood. I learned about sudden oak death and the gold-spotted wood borer.

One day, I came across an article entitled “The Importance of Tree Death.” The premise was that the death of large old oak trees is a necessary part of the natural cycle—death is needed for life. But introduced pathogens, rather than those which are part of the ecosystem’s natural mix, can catastrophically alter this cycle. Such is the case with the sudden oak death pathogen phytophthora ramorum and the gold-spotted wood borer. Both were introduced and both are important to tree death, but in a new and different way.

As I spent many hours in the field photographing most of the oak varieties in northern California, I have come to understand they are increasingly in peril. As many as thirty percent of our coast live oaks have perished already. To the south, gold-spotted oak borers have killed more than 80,000 oak trees in San Diego County over the past decade, the biggest oak mortality event since the Pleistocene. In central California, tanoaks are dying en masse. Walking up coastal creek beds, I count more than a dozen dead trees in one camera frame.

And so I have been photographing these trees—living trees, dying trees, fields and hollows filled with tree carcasses. I make images with unflinching detail, full of color and texture, because there is another importance of tree death—it is a visual, visceral reminder that our world is out of balance and it is our collective fingers which are pressing hard on one side of that cosmic scale.
© Dave E Dondero Photography 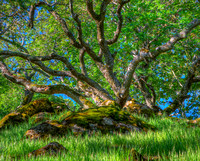 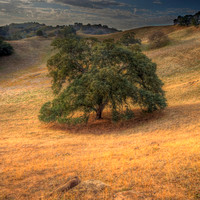 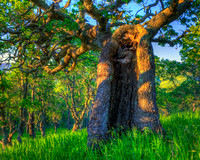